Zounds. A hearty welcome to the internet blog thing that we set up for our zine distro. It's called hoojemaflap because we're simply amazing at um, like naming ... stuff yeah?

London Zine Symposium was fun. So fun in fact that we're going to the Zine Fest at the Women's Library on 12th June too. Mujinga has been at TAA (Temporary Autonomous Art) in London with hoojemaflap this week as well.

London is probably getting sick of us.

I made an inventory flyer but didn't have time to print them for the LZS, I was waylayed chopping vegetables for the Anarchist Teapot who were catering the zine symposium. Possibly a good thing though as we've managed to acquire some more zines since then, including On't Road, Bonuscupped, Angry at the Bus Stop and Letters to Australia. The new Loserdom had arrived and I'm hoping to get some of the new issue of Mild Peril, new WWHRD?, and some copies of Crucial Zine tooooo.

WWHRD also sold out entirely at the LZS.

There seem to be loads of zine fests popping up all around as well at the moment. Bradford zine fest is on 20th June. Leeds was going to have one but the organiser has postponed it for the moment, she may be attempting it in July so we'll wait and see.

A Birmingham group have just got together and are planning a zine fest there, I don't think they've got a date yet, and Tunbridge Wells are gonna be hosting a zine fest too! I've got some flyers about it in the hoojemaflap box (i.e. not on me) so can't remember if they've set a date yet, but it's all very exciting. I don't think we'll make it to Bradford cus it's on a Sunday and it's quite far and we were going to go to a beer festival the night before. Should be lovely though.


The flyer looks like this (I haven't run it past mujinga yet though!): 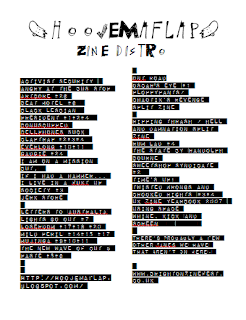 Posted by hoojemaflap at 15:42 No comments:

hoojemaflap
Hiyar, we are mujinga and Ellie and we take a box or two of zines to gigs around Brighton (and occasionally elsewhere). Our email is hoojemaflap AT gmail DOT com. We are also part of the collective who put on the Brighton Zine Fest. We really like zines.